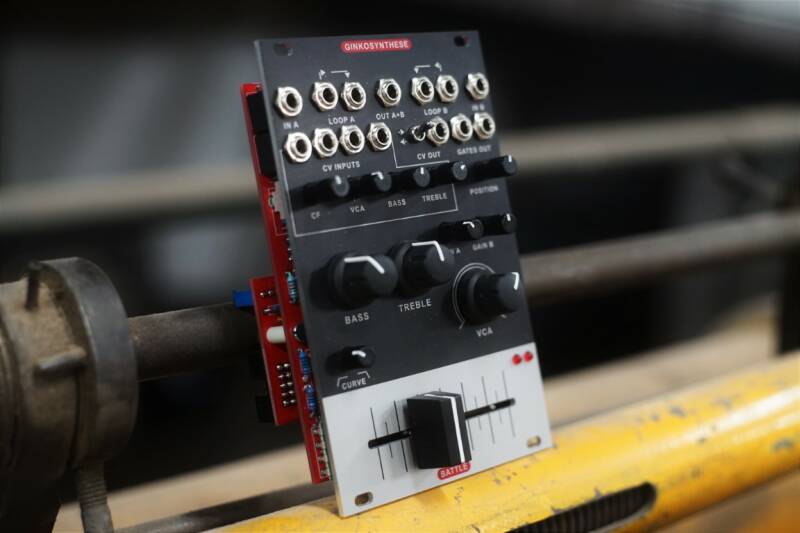 PROFADER will as soon as they arrive from the factory, you can order already but have a little bit of patience.

The PROFADER is one of the most sturdy and smooth faders available on the market. Instead of the usual carbon it has two gliding rails and runs on conductive plastic making it very durable and dust resistant.

Although it almost looks like a regular dj mixer it is not! I designed it with a different goal in mind. I am adoring the concept of patching in an  eurorack setup on itself and the idea for the BATTLE is more based on the freedom of patching and creativity inside a rack than it is based on DJ-ing. So instead of a vinyl with drumloops I am more thinking about a patch on one side and a record for scratching on the other side... or a sampleslicer or wathever you imagine of course... that's the fun of modulars.

"Syntablism is the art of using a turntable and mixer to create and/or manipulate sound with a modular synthesizer. To me, this is the next step in the evolution of scratch music. If ‘Aaah Fresh’ is the most popular scratching sound in the world - a synthesized sound - how amazing would it be to be able to actually scratch synthesis itself? That my friends, is Syntablism.

A few years ago I started out recording new music using Luigi Sircut’s Syntablism patch. I used my timecode vinyl to play and scratch a digital audio file of a sine wave, converted that to pitch-CV and gated the crossfader signal of my DJ mixer with an envelope follower to make music with it. Now, I have produced the first officially released Syntablism E.P. in history called ‘Solidary Confinement’ featuring Ali the Architect, a brilliant producer of Modbap gems from the U.S.A.

Meanwhile, I was secretly hoping that someday some Eurorack manufacturer would get the point and start creating a Eurorack module designed with DJ-ing and Syntablism in mind. The BATTLE module seems to be just that. And you don’t even need to be a scratch expert to get great results out of the BATTLE. It also gives the modular synth world a nice opportunity to perform live more expressively and manually instead of the usual, more cerebral approach.

You can go and create all kinds of generative patches with the BATTLE, or use it as a CV and/or gate fader for live manipulation. A big big thank you to Ginkosynthese for creating the BATTLE module. This can be a gamechanger. On my Patreon page I will continue to report about the details of this great new module.

I hope you will enjoy your BATTLE module, I hope it will unite the worlds of Syntablism and Modbap even further and most importantly, I hope it will help you create more and better electronic music."

Demo video of the BATTLE (using the prototype version)

A brief description of all the features of the BATTLE:

Inputs A and B
These are the audio inputs. Input A relates to the left side of the crossfader, while input B links to the right side. The inputs are normalised to
each other, that means that if nothing is plugged into input B then the signal connected to input A will also appear there, and vice versa. That's very useful when using inserted effects (see below).

GAIN A and B
These knobs determine the gain for input A and input B. Set these to get the desired signal gain and to avoid clipping. If you'd only like to use a single input, and don't want the normalisation mentioned above, then you can turn the gain on the side you're not using all the way down, to mute that side.

Effect loops
Both inputs have an effect loop. You can send input A or B into another module, for example a delay or a filter, and take the treated signal back into the BATTLE. This will create an effect on that channel. It's important to note that the signal is send out after applying the crossfader. The advantage of this structure is that -for example- the decay of an inserted delay effect won't be cut off by the crossfader; the fader will only affect what is send to such a delay. This means the effect on a channel will continue even when the crossfader is set all the way to the other channel. Thanks to the normalisation between inputs A and B, mentioned above, you can also crossfade between a "clean" and a "wet" signal, for example by only supplying an audio signal to input A, and inserting the effect into side B. This is quite different from how effect loops work on other mixers, but with a bit of experimentation you'll find it works very well for using the BATTLE as an expressive instrument.

The Fader
The fader allows you to transition between inputs A and B.

This CV input allows you to use external modulation sources to fade between inputs A and B. The signal has its own attenuator. The value of the signal is added to the position of the fader. This CV input accepts a bipolar signal, with a positive signal fading towards input B, on the right, and a negative signal towards input A, on the left.

The Curve
The Curve determines whether the crossfader transitions smoothly and linearly between inputs A and B, or whether a sharper, more "cutting", transition is used. If you turn the Curve knob all the way to either end, the transition is very sharp on that side. With the knob in the centre you'll get a linear transition. This affects the combined value of the fader and the CF CV input.

VCA, BASS and TREBLE functions
The BATTLE has a VCA and EQ for Bass and Treble, all applied to the overall sound. Each of these functions has a dedicated knob. And each also has an attenuated CV input. These CV inputs accept a bipolar signal, attenuated by the corresponding trimmer. This signal gets added to the position of the knob, to determine the final value of the function.

OUT A+B
This is the output of the audio part of the BATTLE; a mix between inputs A and B (as set by the crossfader) and affected by the EQ and VCA.

CV output with switch
The CV output reflects the position of the fader. The CV output voltage is zero volt on one side of the fader, and a maximum voltage at the other. With the switch you can set which side want to be 0V and which side will be maximum voltage. There is a trimmer on the back of the module with which you can set what the maximum voltage should be. This is not affected by the Curve setting or the CF input. By not being affected by the Curve setting, the CV output is still useful as an expressive modulation source, even while mixing audio using
a steep curve.